Of Magic & Miracles… Thoughts On A Season Of Sharing 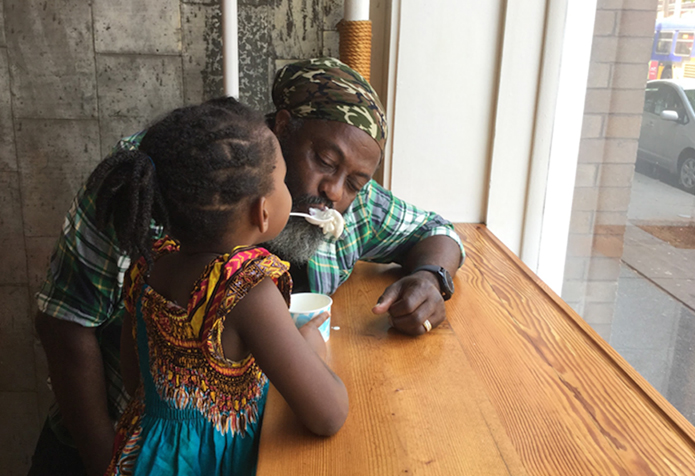 My granddaughter Elle Sophia shares her ice cream with me.

The special appeal of magic is its disdain for facts. Faced with the inconvenient realities of Life, many would opt to wish them away rather than face them with the resolve it would take to change them. The magician’s greatest helper is the deep longing that many of us harbor to be able to shake our heads, blink a few times, and “Abracadabra!” our way to a whole new circumstance.

The art of producing an illusion has great appeal to those who would rather pull a rabbit out of a hat than engage in the arduous task of raising livestock. Magic therefore thrives in a culture where people tend to make themselves available to become believers in the craft of “make belief”. In the end they are entertained … but nothing changes. Magic is thus an attraction to a distraction.

Now miracles… are a whole different matter. Contrary to the assumptions of many, miracles and magic are totally different phenomena. Let me explain… and let me do so by revisiting a well known story from Christian literary traditions. I should point out that the first time I expounded on this matter I had the greater part of a rather conservative audience angry at my “unbelief”; the rest just wrote me off as a hopeless “communist”. In my own defense… I am neither. Furthermore, I reserve to myself the right, even the duty, to be reasonably critical concerning the dogma of the faithful of both sects. Instead of relating a synopsis of the story, let the text speak for itself:

5 When Jesus looked up and saw a great crowd coming toward him, he said to Philip, “Where shall we buy bread for these people to eat?” 6 He asked this only to test him, for he already had in mind what he was going to do. 7 Philip answered him, “It would take more than half a year’s wages to buy enough bread for each one to have a bite!” 8 Another of his disciples, Andrew, Simon Peter’s brother, spoke up, 9 “Here is a boy with five small barley loaves and two small fish, but how far will they go among so many?” 10 Jesus said, “Have the people sit down.” There was plenty of grass in that place, and they sat down (about five thousand men were there). 11 Jesus then took the loaves, gave thanks, and distributed to those who were seated as much as they wanted. He did the same with the fish. 12 When they had all had enough to eat, he said to his disciples, “Gather the pieces that are left over. Let nothing be wasted.” 13 So they gathered them and filled twelve baskets with the pieces of the five barley loaves left over by those who had eaten. 14 After the people saw the sign Jesus performed, they began to say, “Surely this is the Prophet who is to come into the world.” 15 Jesus, knowing that they intended to come and make him king by force, withdrew again to a mountain by himself.

Sooo… Five barley loaves and two small fish … and more than 5000 people to be fed – (They did not count the women and children, but I don’t think that they would not feed them also). This by the same guy who is said to have turned water into wine. When you listen to the average preacher expound on this “miracle”, you are left with the unmistakable impression that after Jesus said the Grace – somehow these five loaves and two fish became enough food to feed that multitude with enough leftovers to fill 12 baskets.

A comparison of the text from all four Gospels reveals one critical difference about the “leftovers”. This account in the Gospel According to John is the only one that states specifically in verse 13 : “So they gathered them and filled twelve baskets with the pieces of the five barley loaves left over by those who had eaten.” The other three Gospels say: “They all ate and were satisfied, and the disciples picked up twelve basketfuls of broken pieces that were left over.” The critical point of departure here is that the other three Gospels do not claim as John does that the leftovers were of the five barley loaves etc …

Let us keep in mind that these are the actions of a man, Jesus, who during his famous Temptations refused, yes refused … to turn stones into bread!! The story goes on to note that after he performed this “sign” he withdrew to be by himself because he knew they would want to make him king for what they saw him do. Now my question is: Why would someone who rebuked the Devil for tempting him by asking that he perform some magic act that would feed a multitude now tempt people with a similar feat?

(One moment people… while I erect a shield to protect me from the stones.)

I do not think that what actually transpired is what most preachers claim.

There is nothing in this story that suggests that after Jesus prayed the items in front of him somehow inexplicably multiplied. These thousands of people knew about this man’s inspired work. They brought their family members to see and hear him… women and children included. They knew by now that this would not have been a brief affair. I think they came prepared, each wanting to gain something for self and family.

What are the chances that in a crowd this large only one single person, a young boy at that, had the good sense to come prepared for a long day by bringing lunch?

Oh… there was definitely more food in that crowd. Jesus knew this. That is why John accounts for the rhetorical question that he put to Phillip, knowing full well what needed to be done in such a situation. The resources to meet the needs of these people were right there among them. They came to see what Jesus could and would do for them. What was not accounted for in that transaction was the real issue of what they could do for each other. They came to get; what the multitude was not fully aware of at that point was the truism that “it is more blessed to give than to receive”.

And so it was that those who came expecting to get something for self, found something even better. The Teacher … the Healer … brought about a new awareness of the communal benefits… the wonderful abundance … that can come from each one of us sharing the little we do have. Yes we are talking about the application of that old communal praxis: from each according to his ability – to each according to his need.

And that is what happened.

There was more available among the multitude on that day than what was initially brought forward. The teacher stilled their unfounded anxieties about having to share what they had. He made them sit down with each other in an organized way. He expanded their consciousness concerning the real connectedness they shared by pointing them to the true source of all things… our Heavenly Father who gives us this day our daily bread…

The ideal that is expressed in the idea “our father” – is one that recenters our attention on an aspiration to the greater benevolence that is expressed in a sense of brotherhood. Identifying ourselves with a Heavenly Father elicits a sense of spiritual kinship. It is this spiritual kinship that makes us say we will feed the hungry, clothe the naked, provide healthcare for the sick, and bring solace to the broken-hearted.

Those who came for the magic that day rediscovered themselves as part of something wonderful that happened. And that my friends is the true meaning of the word miracle: something wonderful that happened. It is not the same as magic which is transitory and illusive. The power of miracles is in their ability to take our actions and their results to the realm of the extraordinary. It is a resignation to the assumed ordinariness of our lives that make us ignore each other’s needs. It is this ordinariness that numbs us to the real potential we each possess to make our world a more wonder-full place. This multitude became participants in a miracle.. a wonderful happening that they themselves were party to, and actors in. Indeed they came to realize what Jesus meant when he taught them: the kingdom of heaven is among you. The happening of this day was to be an enduring “sign” of that truth.

So… . Let us teach ourselves and our children the value and the power of sharing. We can make this miracle happen again and again in a world that is in many parts hungry for compassion… for healing… for comfort… for true leadership.

The work of creating a better world is not a calling to some magician’s spectacle. It is more substantially grounded in a commitment to … each one of us … becoming better persons. A dat mi a seh. (That’s all I’m saying)