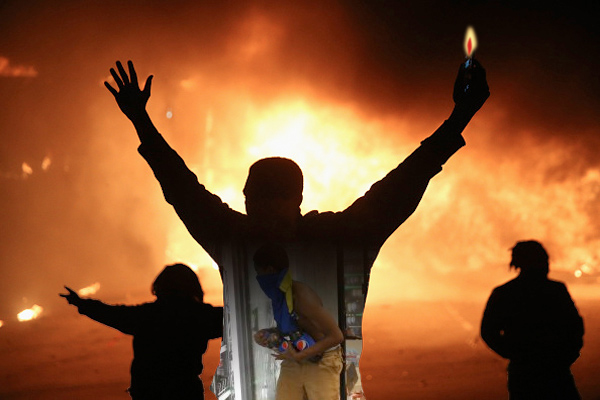 This morning I woke up in a curfew;
O God, I was a prisoner, too – yeah!
Could not recognize the faces standing over me;
They were all dressed in uniforms of brutality. Eh!
How many rivers do we have to cross,
Before we can talk to the boss? Eh!
All that we got, it seems we have lost;
We must have really paid the cost.
(That’s why we gonna be)
Burnin’ and a-lootin’ tonight;
(Say we gonna burn and loot)
Burnin’ and a-lootin’ tonight;
(One more thing)
Burnin’ all pollution tonight;
(Oh, yeah, yeah)
Burnin’ all illusion tonight.
—Bob Marley… “Burnin’ And Lootin”

Did you see the smug expression on Bob McCulloch’s face as he set out to justify the actions of Officer Darren Wilson by discrediting the witness accounts of this policeman’s indiscriminate actions in the killing of unarmed teenager Mike Brown? A rather long question I agree, so consider thus while you ponder it. Robert McCulloch’s father was a police officer who was killed on the job in 1964 by an African-American man. Paul McCulloch was killed the evening of July 2, 1964, during a gun battle in St. Louis’s infamous Pruitt-Igoe housing projects. His alleged killer, Eddie Steve Glenn, was a black man who had reportedly abducted a white woman.
McCulloch was 12 years old at the time of his father’s death. In addition to his father, McCulloch’s brother, an uncle and a cousin all served with the St. Louis Police Department, and his mother worked as a clerk at the department. McCulloch, who as a teenager lost a leg to cancer, made it his career ambition to become a prosecutor. He was quoted by the St. Louis Post-Dispatch as telling a reporter, while first campaigning for the office: “I couldn’t become a policeman, so being county prosecutor is the next best thing.”
No one was surprised by the outcome of the grand jury deliberation. Bob McCulloch did not want an indictment. In his mind all his police comrade had done was kill a “demon”. A black demon at that. One like the other black demon that allegedly killed his dad. This outcome is exactly what he designed it to be… Absolution for his comrade in arms… Vengeance ongoing for his fallen father. And so now his only remaining duty was to present the findings of this secret trial in a way, and at a time , to achieve maximum impact. How does one in his position, in a place like Ferguson, Missouri, cover up an injustice? Should he use the dark of night? Should he present his findings in such an insensitively smug way as to inflame the passions of those who were there to protest? Would he collaborate with the other authorities to make sure that his inflammatory response to this tragedy would become a trigger for a fiery response from protesters, thus creating a  needed distracting narrative? Well a literally fiery response was what resulted. Ferguson burned overnight… And may continue to burn.
Huffington Post reports:
“Ferguson, Missouri, is waking up to a city that is still smoldering after a night of unrest following a grand jury’s decision not to indict officer Darren Wilson in the shooting death of Michael Brown.
At least a dozen buildings were torched and looted, many of them local businesses that police said were total losses. Dozens of cars — including two police cruisers and rows of vehicles at a car dealership — were also vandalized and left charred. St. Louis County Police Chief Jon Belmar said he heard about 150 gunshots, none from police.”

The pictures coming out of Ferguson show security forces in some cases standing by as the destruction was being effected. They had more than ample time to prepare for this eventuality. We all witnessed the press conferences by the governor and others stating how prepared they would be. And so we must wonder… Is this the result that Bob McCulloch and some others in authority wanted? In the face of what most reasonable observers see as a travesty of Justice, did they want to create a narrative that would distract attention away from the real tragedy?The actions of this policeman has become another trigger for action against the vile actions of law enforcement in minority communities. If I were Darren Wilson or any of those cuddling him, I would not break out the champagne just yet. Not as long as people in minority communities have cause to lament:
“This morning I woke up in a curfew;
O God, I was a prisoner, too – yeah!
Could not recognize the faces standing over me;They were all dressed in uniforms of brutality. Eh!”