This page is dedicated to bring dynamic focus to the issues that shake and shape the foundations of our society.

The Wheels Of Justice Grind On… The Michael Dunn Verdict

Today a man in Florida found out the ultimate meaning of the term Civil Society.  Two years ago he indiscriminately …and criminally …unleashed the deadly force of the measure of his corrupted manhood on a group of black teenage boys playing music loudly in the SUV they were in. It was “Black Friday”, and a dark day for the family of 17 year-old Jordan Davis. He was murdered by Michael Dunn.

As reported by CNN
“Dunn has said he shot at the vehicle because he thought Davis had a weapon and feared for his life, but the prosecution has alleged Dunn was the aggressor and pointed out he kept firing even after the teens fled.”

In closing arguments prosecutor Erin Wolfson declared to the jury
“Let me be very clear: There was no shotgun in that red Durango that night. … There was no stick, there was no branch, there was no hollow pipe. There was no weapon. Inside that Dodge Durango were four teenagers… four kids who had just left their moms, four kids who were spending their Black Friday doing what lots of people do — out at the mall, they were just hanging out, being kids, listening to music that they liked.”

Those who knew him have spoken out about the belligerent vileness of Michael Dunn.
“Taking aim at Jordan Davis, 10 shots — that’s what he fired that Friday night, nine of them hitting his intended target, each time intending to kill, and kill he did,” Wolfson said.
Dunn would have us believe that he is no racist, but his own words testify against him. These are his words in a letter he wrote from jail:

“I’m really not prejudiced against race, but I have no use for certain cultures. This gangster-rap, ghetto talking thug ‘culture’ that certain segments of society flock to is intolerable. They espouse violence and disrespect towards women. The black community here in Jacksonville is in an uproar against me — the 3 other thugs that were in the car are telling stories to cover up their true ‘colors.”

Michael Dunn will have ample time for reflection. He faces life without parole…or a death sentence. In either case he must now man-up to the consequences of his inhumanity.

Now let the wheels of Justice grind… Ferguson, Missouri waits, and Darren Wilson is laying prostrate in its path. He has not yet been arrested. 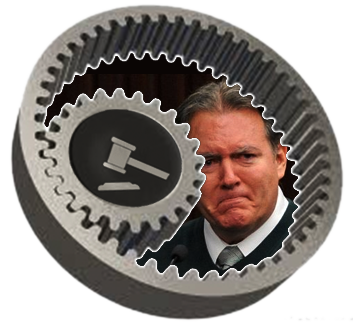 Now let the wheels of Justice grind…
Ferguson, Missouri waits, and Darren Wilson is laying prostrate in its path. He has not yet been arrested.