This is a page dedicated to addressing current issues in our society through the medium of poetry. Periodically we will feature a poem from ‘Figtree Books’ that we believe engages in a critical way, the ongoing dialogue on formative issues in our lives as a society.

Of Hate and Fear and Murder… And Civilization

What sickness is it that inflames a man’s mind to the extent that he would praise Hitler? What is the source of the vain insanity that leads a person to the precipice of that bloody Hell where he sees his own survival only in terms of the annihilation of those he perceives as different? What is it that ails the racist, the white supremacist, the ethnic cleanser?

Look closely and see that whatever it is, is by no means empowering. Look closer and realize that the madness that drives the hater has its own self-destructive logic. The assumption of power that drives the victims of this existential asylum is just a delusion. Yes. Only a DELUSION. For it is not a sense of strength that drives the murderous inclinations of madmen, but a rather deep-seated sense of his own nonentity-ness. It is a neurosis… A wickedness that has its roots deep in the muck of a corrupted sense of “being”. It is that vile reasoning that his existence is only validated in the destruction of those he perceives as the reason for his own sense of powerlessness.

Yes. IT IS FEAR THAT DRIVES HATE. The permission to murder that the hater gives himself is really just a function of his own perceived impotence. True power is ALWAYS expressed in the tendency to empower others. The fearful finds and rationalizes his impotence in the convenient projection of his existential dilemma onto those who are superficially or culturally separable. It is a deep-seated and essentially primitive instinct. Like chicken of one color in a dominant group, they seek to resolve the perceived threats to their survival and dominance through the subjugation, and ultimately the destruction of an identifiably “different” minority. That minority, in their estimation, must not be allowed to thrive since their expressed fecundity is a threat to the cultural cockiness of the hater. And so the threatened “chicken” feels he must de-feather that minority. It is not a far step between de-feathering a thriving bird and taking its life. And so the hater becomes a murderer.

The Achilles heel of the white supremacist ideology is a progressively civilized society in which legal  consensus reigns. The hater ultimately depends on the inaction of society regarding his wickedness. He bets on the silence and/or complicity of a population that cowers in the face of uncivilized brute-force. A society and a world that agrees on progressively moral standards of Justice saw the demise of Adolf Hitler and his vile kind. That same impetus of Justice will inevitably be brought to bear against the moral and cultural deficiencies of the current and former “knights” of the KKK… And it is the children of those they have victimized who will administer the prevailing codes of Justice against them.

In the end, we must take responsibility for the environment that we create by the moral choices that we make. Whether we live with the torment of our hate and the virulence of our morally compromised choices or create together a culture in which we can all thrive despite our superficial differences is up to us. The climate of our coexistence is a function of the quality of the relationships that we generate. We can choose an atmosphere typified by the hopefulness of spring, or suffer the discomforts and damages of the prolonged summer of our discontent. The following poem is offered for our corporate reflection. 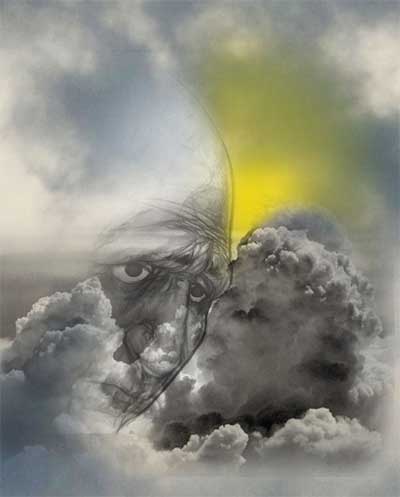 Now pours our vented rage
In fiery flashes and thunders loud
Our view obscured
By fierce funnel clouds…
Today we knew
The reign
Of our wrath
As a dreadful frightening
Thunder storm.

From:  “In My Element.”  By Roy Alexander Graham. FigTree Books.

Share your thoughts with us on this volume by clicking here.